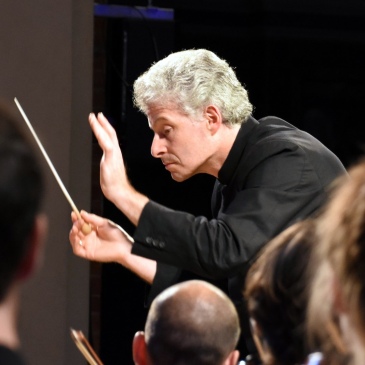 Conductor, solo and chamber cellist, teacher — in an exceedingly busy career Robert Max has for years filled all these roles and has travelled widely on four continents.  As a conductor, Robert directed the symphony orchestra at Royal Holloway, University of London, for over a decade and has on many occasions conducted the Covent Garden Chamber Orchestra and the Marryat Players – a chamber orchestra for young musicians. He made regular visits to Romania to conduct the Arad and Oradea Filharmonic Orchestras and, following three annual visits to Tambov in Russia during the early 2000s to conduct, give recitals and direct chamber-music academies, he was made an Honorary Professor by the Rachmaninov Institute, one of the oldest conservatories in the country, which is located in that city.  Other orchestras he has conducted are the BBC Concert Orchestra, the Oxford Sinfonia and the Kazakh State Symphony Orchestra.

Robert is currently in his 13th year as musical director of the Oxford Symphony Orchestra, whose adventurous programmes under his baton have ranged from Berlioz to Prokofiev and Britten and included such challenging works as Strauss’s Also Sprach Zarathustra and Britten’s Cello Symphony.

Among his activities as a solo and chamber cellist, Robert has performed concertos with the Arad Philharmonic, London Mozart Players, English Sinfonia and the Kazakh State Symphony Orchestra and has taken part in festivals in India, Canada and Hong Kong.  For thirty years he has been a member of the Barbican Piano Trio, with which he has made recordings for several labels, and he is principal cellist of the London Chamber Orchestra.  He was musical director of Pro Corda, the national school for young chamber music players, and now coaches chamber players at MusicWorks, which organises unique chamber music courses for talented young string players and pianists.

In addition to his work as a performer, Robert is a member of the International Board of Governors of the Jerusalem Academy of Music and Dance, President of the North London Music Festival and Artistic Director of the Frinton Festival.

More information about our future concerts can be found here.